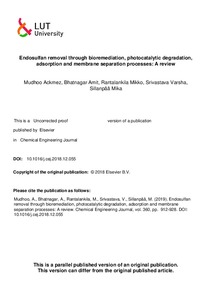 Endosulfan is a highly polluting and toxic pesticide which has been used in many areas globally to control pests in view to improve productivity. Concomitantly, endosulfan has also been associated with many cases of environmental pollution and various types of irreversible metabolic dysfunctions in living organisms both on lands and in waters. Subsequently, since over the last three decades, several endosulfan remediation methods have been studied and many are gradually bringing hope towards efficient clean-up. This article specifically reviews endosulfan degradation and endosulfan removal by discussing the recent findings reported and the trends observed in studies reporting bacterial and fungal bioremediation, photocatalytic degradation, adsorption and membrane separation processes. The salient observations from this review are: there are many bacterial species which degrade endosulfan isomers with relatively high efficiencies; many studies indicate the merits of plants in phytoextracting and accumulating endosulfan but the identification of endosulfan hyperaccumulators remains; photocatalytic systems involving one or two metals also bring about significant endosulfan degradation but issues related with variations in rates of reactions, catalyst deactivation due to fouling, intricacy of metal-based nanocatalyst structures and their complex fabrication methods and lack of control of morphology of the nanosized structures have to be addressed; and membrane retention systems specifically treating endosulfan-contaminated aqueous media are scanty and more analysis is also needed to optimize the shear force-membrane structural integrity-membrane stability rapport of the membranes being developed. In the end, a number of research and development avenues which need further attention and probing towards the development of suitable endosulfan-remediation routes are pointed out.