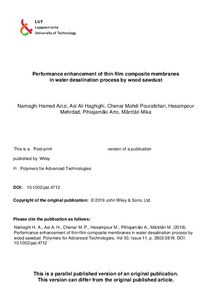 In this study, polysulfone/wood sawdust (PSf/WSD) mixed matrix membrane (MMM) was prepared as a novel substrate layer of thin‐film composite (TFC) membrane in water desalination. The main aim was to evaluate how different amounts of WSD (0‐5 wt%) and PSf concentrations (12‐16 wt%) in the porous substrate affect the properties of the final TFC membranes in the separation of organic and inorganic compounds. Morphological and wettability studies demonstrated that the addition of small amount of WSD (less than or equal to 1 wt%) in the casting solution resulted in more porous but similar hydrophobic substrates, while high loading (greater than or equal to 2 wt%) of WSD not only changed the substrate wettability and morphology but also increased and decreased the swelling and mechanical properties of substrate layer. Therefore, PA layer formed thereon displayed extensively varying film morphology, interfacial properties, and separation performance. Based on approximately stable permeate flux (ASPF) and apparent salt rejection efficiency (ASRE), the best TFC membrane was prepared over the substrate with 12 to 14 wt% of PSf and around 0.5 to 1 wt% of WSD. Although notable improvements in permeate flux were obtained by adding a small amount of sawdust, the results clearly indicate that the salt rejection mechanism of TFC membrane was different from the glycerin rejection mechanism. Furthermore, durability results of TFC membranes showed that in continuous operation for 30 days, TFC‐14/0.5 and TFC‐14/01 have the maximum plateau levels of stable permeate flux and salt rejection among the all TFC membranes.