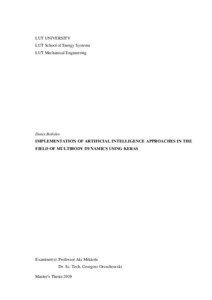 The aim of the research was to develop an approach of utilizing of neural networks in the field of multibody dynamics using Python and its Artificial Intelligence library Keras. The hypothesis of the research is corresponding to the fact that the utilizing of neural networks and Artificial Intelligence is capable to bring the field of Multibody Dynamics to the new level by increasing the performance, decreasing setup time, that results the development of meta-model that can be used for a predictive design, data analysis and design optimization.

In the practical part of the project software such as Matlab, Python was used. At the first stage, the experimental data for two nonlinear functions was edited and saved as HDF5 file using Python and Matlab. Then the obtained file was used as the dataset for training of Neural Network that was built using Keras. At the second stage the feasibility of the approach was tested on the example of double pendulum. First, the equations of motion were obtained using MatLab, then the Neural Network was developed for the system fed by the data obtained from the simulation of equations of motion. At the next stage the networks were tested and the results were analyzed in order to get the results of the research.

Results of the research are described using graphs and tables that demonstrate the performance of neural networks for two studied cases: system of two nonlinear equations and double pendulum connected with torsional spring.