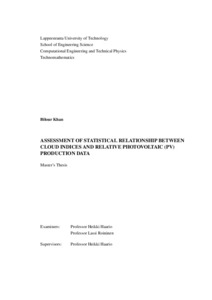 The primary need and necessity for survival is energy. Currently, mankind's reliance primarily on fossils fuels which are non-renewable and rapidly depleting. Furthermore, the emission of greenhouse gases from these finite resources contributes greatly to the ecological challenges to mankind. Thus, effective utilisation of renewable energy resources becomes important determinant of future existence in this universe. This study aims to explain and assess a meaningful relationship between cloud indices and photovoltaic (PV) relative power production data, which is the ratio of the measured PV production and modelled PV production. The modelled PV production is calculated using PV library (PVLIB) in MATLAB. Statistical modelling analysis has been implemented to understand the in-depth relationship between cloud indices and relative PV production data. To the context of practicality, the findings in the form of histogram analysis contributes in better understanding of the relationship between relative PV production and cloud indices.