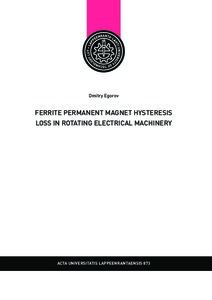 Kaikki oikeudet pidätetään.
In reference to IEEE copyrighted material which is used with permission in this thesis, the IEEE does not endorse any of Lappeenranta-Lahti University of Technology LUT's products or services. Internal or personal use of this material is permitted. If interested in reprinting/republishing IEEE copyrighted material for advertising or promotional purposes or for creating new collective works for resale or redistribution, please go to http://www.ieee.org/publications_ standards/publications/rights/rights_link.html to learn how to obtain a License from RightsLink.
Näytä kaikki kuvailutiedot
Julkaisun pysyvä osoite on
https://urn.fi/URN:ISBN:978-952-335-429-6

In this doctoral dissertation, the focus of study is on the hysteresis behavior of ferrite PMs used in electrical machinery. Extensive measurements were performed by means of a Vibrating Sample Magnetometer (VSM) based system. The measurement procedure for the VSM was developed to be a relevant option in terms of electrical machine design. The detected magnetic phases with a reduced coercivity may introduce an additional loss source in the PM material when it is placed in a magnetic circuit of a PM electrical machine.

The hysteresis behavior of the ferrite magnets was simulated by the static History- Dependent Hysteresis Model (HDHM) with a newly introduced analytical equation for reversal curves. The HDHM concept was further developed to enable the simulation of ferrite magnets consisting of multiple magnetic phases with markedly different magnetic properties. The results of the study clearly indicate that the ferrite PM hysteresis loss does not play a significant role in most electrical machine designs. Nevertheless, the ferrite PM material can be a source of considerable hysteresis loss under unfortunate operating conditions in the region of the BH plane relevant to the electrical machine design.