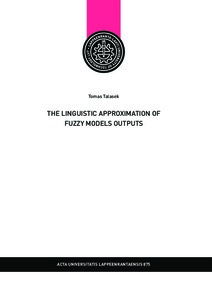 Kaikki oikeudet pidätetään.
In reference to IEEE copyrighted material which is used with permission in this thesis, the IEEE does not endorse any of Lappeenranta-Lahti University of Technology LUT's products or services. Internal or personal use of this material is permitted. If interested in reprinting/republishing IEEE copyrighted material for advertising or promotional purposes or for creating new collective works for resale or redistribution, please go to http://www.ieee.org/publications_ standards/publications/rights/rights_ link.html to learn how to obtain a License from RightsLink.
Näytä kaikki kuvailutiedot
Julkaisun pysyvä osoite on
https://urn.fi/URN:ISBN:978-952-335-435-7

The contribution of the thesis lies in the proposal of a framework for the analysis of performance of different distance/similarity measures of fuzzy numbers such that its use is straightforward, it requires only limited knowledge from his potential user, it allows for a direct comparison of the performance of different distance/similarity measures in the given context and it provides results by means of graphical representation. Although most of the thesis focuses on the frequently used shapes of fuzzy numbers (triangular, trapezoidal; both symmetrical and asymmetrical), we also propose a modification of the framework which allows for the analysis and visualization of results for Mamdani-type fuzzy sets (outputs of Mamdani fuzzy inference). On this modification we also show the simplicity of the generalization of the framework for different conditions and contexts (represented by different approximated objects etc.). Another contribution is the proposal of a novel linguistic approximation method based on the idea of fuzzy 2-tuples in the thesis. This method differs from other methods in a way that it requires only small number of linguistic terms (i.e. the decision-maker’s vocabulary for the description of the results can remain reasonably limited, hence the requirements on understanding the meaning of the linguistic values can be kept to a reasonable minimum), but thanks to the 2-tuple concept it can results in an infinite n umber o f l inguistic l abels c omposed o f one of the known linguistic terms and a description of its “shift” which facilitates easy understandability of the results of the linguistic approximation.

Eleven publications on which the author participated are appended to the thesis. These publications summarize the mathematical results and provide closer insights into the issue of the investigation of the performance of linguistic approximation under different distance/similarity measures.