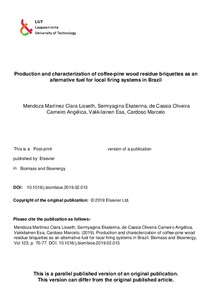 In this work, the production viability, physical, chemical and mechanical properties of briquettes produced from mixtures of coffee shrub residues and pinewood, were evaluated. The densification was carried out under constant operating conditions (temperature of 120 °C, pressure of 8.27 MPa) in a piston-press type laboratory-scale briquetting machine. Coffee shrub residues were mixed with pinewood in ratios of 25%, 50% and 75%. In addition, reference briquettes of pure pinewood and of each type of coffee shrub residue were produced. To characterize the raw material, ash content, volatile matter, fixed carbon together with the calorific value of produced samples, were measured. To characterize the suitability of the briquettes produced: apparent density, energy density, tensile strength, and equilibrium moisture content were determined. The highest values of energy density (19133–19899 MJ m−3), tensile strength (415–569 kgf), apparent density (1107–1163 kg m−3) and favorable values of equilibrium moisture content (9–11 wt %) were obtained from a mixing ratio of 75% of pinewood. The novel contribution of this research was to develop briquettes with appropriate physical and mechanical parameters from new raw materials that could serve as sustainable fuel sources for local firing systems.