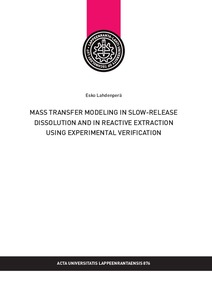 In this thesis, models related to mass transfer operations were studied in two cases. One study case was the dissolution of potassium chloride (KCl) particles in water, and another study case was the reactive solvent extraction of metal ions from aqueous solution into an organic droplet. In these study cases, the common point was that mass transport takes place over a phase boundary. However, the system structure and the hydrodynamic behavior of the interfaces are different. These differences are reflected in the mass transfer models. In the dissolution of KCl particles, the system is a suspension, and the measured parameters are averages. The phase interface is rigid between the particle and solution. In solvent extraction, the system consists of a single droplet surrounded by a large continuous phase. The interface between the droplet and the continuous phase is dynamic.

The dissolution rate of the KCl particles was controlled by using a suitable coating. Two coating materials were used: native starch and lignin. Native starch is water soluble and has a tendency to form hydrogels. Conversely, lignin is insoluble in neutral water. In addition, experiments with two uncoated KCl particles were performed. Four models were evaluated to find a suitable model to predict the dissolution: (1) a reaction kinetic model, (2) a gel model, (3) an active surface model, and (4) an active surface model assuming diffusion layer thickness is equal to particle radius. Model (1) was able to give acceptable predictions for all particles. For starch-coated particles, dissolution was explained by the gel model (2). For the lignin-coated particles, the active surface model (4) was found to be suitable.

Mass transfer in reactive solvent extraction was studied using single droplet experiments. Cu ions were extracted from the aqueous solution into a droplet where the organic solvent contained an extractant. A new image analysis method was developed to measure droplet concentration, size, and velocity. Using the new analysis method, models of mass transfer were formulated for the droplet formation, droplet rise, and droplet coalescence stages.