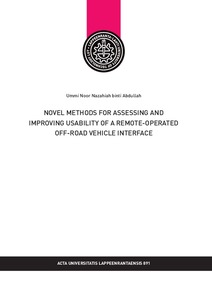 Autonomous control systems have been under intensive development in the off-road vehicle (ORV) industry because of high demand for increasing productivity in recent decades. In those systems, the progress has happened in particular in the container handling and mining industries, while some safety critical functions are still carried out by using remote operation by a human driver. The remote-operated station itself has its own issue, which is its lack of direct motion feeling, due to the loss of physical interaction and experience between the operator and the machine. The objectives of this thesis are to assess the user experience (UX) of existing remote-control interfaces, to establish a method for developing a list of design metrics based on UX goals, to assess the effects of haptic feedback as a technological solution, and to evaluate the usability of interfaces with haptic feedback by utilizing simulation and a virtual environment.

Firstly, a methodology using the User-Centered Design (UCD) approach was established to explore and investigate the UX in human-machine interaction in order to obtain the UX goals in the remote-operated control of an ORV. The UX investigations were administered in a real working environment at two international cargo terminals that use a remote-operated station (ROS) for controlling and handling the container cranes in the terminal blocks. The data from UX investigations was analyzed using modern software to produce the related results and UX goals. Secondly, a methodology to establish a list of design metrics based on UX goals was developed. Thirdly, an investigation methodology using virtual environments and real-time simulators with haptic interface for assessing the effects of haptic feedback as a solution for UX goals, and the list of design metrics in relation to the user’s age, gender and the effect of resting on a remote-operated ORV work shift was developed. Finally, a methodology to test the usability of haptic feedback from an ORV remote-operated control interface using the virtual environments and real-time simulators was developed. This usability testing measured the effectiveness, efficiency, and satisfaction of haptic interface system in ORV remote control and handling operation. Human-in-loop (HiL) virtual models by Mevea Simulation were run to study both the haptic feedback effect and the usability testing process. The simulations were run in the virtual environment of the Laboratory of Intelligent Machines at Lappeenranta University of Technology. A haptic feedback system connected with the control interface of a virtual simulation model of an automated rubber-tired gantry (A-RTG) was utilized in this investigation process.

At first, six UX goals for ORV remote-operated control interface design were developed based on eight positive experiences, eight negative experiences, and improvement suggestions. Next, a list of design metrics was established based on the two highestranking UX goals. Haptic feedback was suggested in the list of design metrics as one of the solutions for UX goals. Therefore, haptic feedback was investigated in an ORV remote-operated control interface and the results showed a significant difference in haptic feedback between two age groups. The average haptic feedback was 0.1225 N among participants below 30 years of age and 0.4455 N for those above 30 years of age. In addition, the usability testing results showed that the mean value for haptic joystick effectiveness was 46.31 cycles and for a normal joystick was 46.19 cycles in 10 minutes of operation. The mean efficiency when using a haptic joystick was 8.001 s, compared to 7.888 s when using a normal joystick. Finally, on average, user feedback for satisfaction was rated at the second point of the assessment scale (the haptic joystick was considered very good with regard to satisfaction) for the haptic joystick.