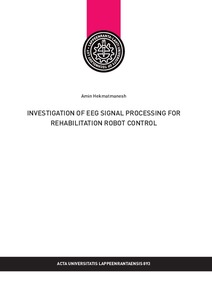 A significant number of stroke patients suffer from movement disability and the numbers are increasing annually. The Brain Computer Interface (BCI) science enables solutions for the paralyzed patients based on the location and reason of paralysis. In the experiment, we focused on the algorithms to extract the commands in the Electroencephalogram (EEG) for movement disabilities and recording the EEG signal with a non-invasive method. One of the most challenging issue for the non-invasive method is filtering the contaminated EEG signal to extract the brain commands. To overcome noise effects, several mathematical approaches have been developed. In this study, three algorithms are implemented to detect the brain’s movement patterns based on the EEG signal processing techniques. The first concept for feature extraction of the imaginary patterns is finding the direction of the features by eigenvalues and gaining them based on number of repetitions. This concept is informative to identify the event-based potentials, named as Filter Bank Common Spatial Pattern (FBCSP) features with the weighting Discrimination-Sensitive Learning Vector Quantization (DSLVQ) algorithm. The features are selected and classified by several improved versions and combinations of the SVM, RBF methods. The second concept for feature extraction is self-similarity, in which obtained by wavelet packet with a customized-ERD mother wavelet and Detrended Fluctuation Analysis (DFA). The wavelet packet and DFA algorithms check the self-similarities based on a pattern and correlation, respectively. The third concept for feature extraction is the chaotic behaviour of the brain during imaginary movements. In the algorithm, the chaotic feature is Chaotic Approximation of LLE (CALLE) using the Chaotic Tug of War Optimization (CTWO) method. In the experiment, a task regarding the BCI competition is designed. Eighteen candidates participated in the EEG experiment for controlling of a bionic hand and a mobile vehicle BCI applications.

The results are based on the accuracy and paired t-test that shows the precision of the methods and the how much are they significant. Results in the experiments showed that the first method, the FBCSP with the DSLVQ algorithm with the combination of the SMSVM-GRBF classifier, achieved the average accuracy of 78.03% with the paired t-test P < 0.05. The second method, which is the Wavelet-DFA with ERD mother wavelet algorithm achieved the best average accuracy of 85.33% with paired t-test p<0.001 among the implemented methods. The third feature algorithm is based on the CALLE features and the CTWO optimizer that achieved 68.25% accuracy with paired t-test P < 0.05, which is 10.48% higher in comparison to the traditional LLE feature.

From the results, it is concluded that the Wavelet-DFA with the ERD mother wavelet generates distinctive features and the SMSVM classifier with the GRBF kernel achieves significant results. The best method has ability of finding more complicated movements and integrating with the real-time systems towards mimicking human movements, controlling prosthetics and computers that can be operating by thought alone.