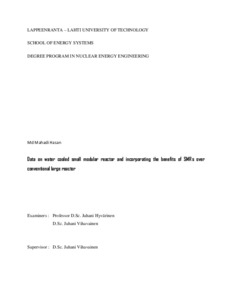 Goal of this thesis report is to combining data on water cooled SMR design technology and under which condition SMR could be a valid choice over traditional type large reactors. This report consists of 2 parts, where part 1 comprises the literature review on the beneficiary use of SMR by comparing them with large reactor based on economical and other data, part 2 is related to the compilation of design based data of different water cooled advanced reactors those are under construction and in order to the near term deployment. In the literature review part (part 1) NuScale SMR has been taken as identical while comparing the SMRs with the large reactor. In the compilation of the data part CAREM, SMART and ACP100 has been chosen.