Energy systems spillovers and willingness to change : a focus on the oil sands region in Alberta 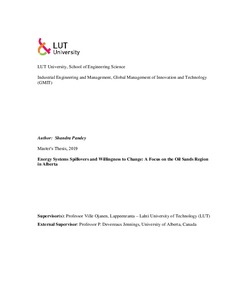 In this thesis, I examine how communities and their members in oil dependent communities perceive energy system spillovers and their willingness to change. Spillovers from energy systems, in the form of GHGs, remediation costs, and local health risks, are considered critical elements to make endogenous to economic decision if the planet is to combat climate change.

The nature of these spillovers in local communities has been partially documented, but less attention has been given to the behavioral components; i.e., to the perception of them and their riskiness and whether such perception is connected to a willingness to change. This is particularly critical for communities in regions dependent on carbon production, because such communities have long been the bulwark against change. In this regard, this study examines communities in Alberta Canada, a province heavily dependent on oil and natural gas.

Through informal interviews, participation in “Future Energy Systems” projects, and survey of three local communities – two without renewable energy and one with substantial renewables, I discovered more willingness and readiness to change than might be apparent from the outside. It would seem that some additional “nudge” incentives might be needed to aid that transition.