The technical, economic and environmental feasibility analysis of implementing electrical based heat pumps powered by solar PV systems for the countryside households located in the Bolivian highlands 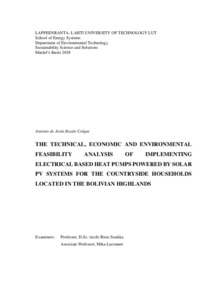 The absence of heating systems alongside with the adverse weather conditions of the Bolivian highlands, generate adverse living conditions for the rural population of the region, causing an over exigency of the national electrical system during the colder months of the year, thus increasing the emissions of CO2 emitted by combustion of natural gas in the thermoelectric plants of the country. Furthermore, Bolivian people living in the rural and suburban areas of the highlands still do not have complete access to basic services such as electricity. A combined system of heat pumps powered by solar panels has been designed to tackle this problematic. Tacking advantage of the Social Housing Program that the Bolivian Government implemented a combined heat pump & solar PV system was dimensioned for covering the calculated thermal demand of 7.1 kW of the prototype houses of the mentioned program.

The heat pump selected for the project has a maximum thermal power of 8,1kW and an electrical demand of 3,301 kWh was chosen for the heating period of 8 months.

An arrangement of 6 solar panels, with an efficiency of 19.3%, will generate 5,056 kWh per year, generating an excess of production (during the heating period) of 8.7 kWh/month which alongside with the complete covering of the non-heating period´s house demand, will generate 438 kWh/year/house ready to be reinjected into the National Interconnected System.

By implementing the project 4,730 tCO2/year are avoided, representing a reduction of 34% of the current emissions generated by the total number of houses. An additional investment of 75% on the initial investment of 25,000 USD is needed for the implementation of the combined system.