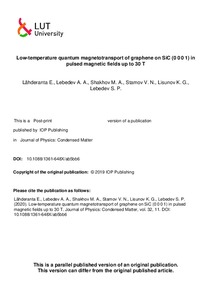 Resistivity, ρ(T), and magnetoresistance (MR) are investigated in graphene grown on SiC (0 0 0 1), at temperatures between T ~ 4–85 K in pulsed magnetic fields of B up to 30 T. According to the Raman spectroscopy and Kelvin-probe microscopy data, the material is a single-layer graphene containing ~20% double-layer islands with a submicron scale and relatively high amount of intrinsic defects. The dependence of ρ(T) exhibits a minimum at temperature T m ~ 30 K. The low-field Hall data have yielded a high electron concentration, n R  ≈  1.4  ×  1013 cm−2 connected to intrinsic defects, and a mobility value of µ H ~ 300 cm2 (Vs)−1 weakly depending on T. Analysis of the Shubnikov–de Haas oscillations of MR, observed between B ~ 10–30 T, permitted to establish existence of the Berry phase β  ≈  0.55 and the cyclotron mass, m c  ≈  0.07 (in units of the free electron mass) close to expected values for the single-layer graphene, respectively. MR at 4.2 K is negative up to B ~ 9 T, exhibiting a minimum near 3 T. Analysis of MR within the whole range of B  =  0–10 T below the onset of the SdH effect has revealed three contributions, connected to (i) the classical MR effect, (ii) the weak localization, and (iii) the electron–electron interaction. Analysis of the ρ(T) dependence has confirmed the presence of the contributions (ii) and (iii), revealing a high importance of the electron–electron scattering. As a result, characteristic relaxation times were obtained; an important role of the spin–orbit interaction in the material has been demonstrated, too.