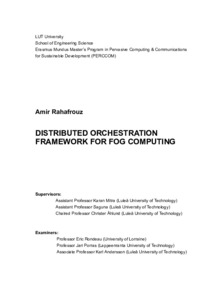 The rise of IoT-based system is making an impact on our daily lives and environment. Fog Computing is a paradigm to utilize IoT data and process them at the first hop of access network instead of distant clouds, and it is going to bring promising applications for us. A mature framework for fog computing still lacks until today. In this study, we propose an approach for monitoring fog nodes in a distributed system using the FogFlow framework. We extend the functionality of FogFlow by adding the monitoring capability of Docker containers using cAdvisor. We use Prometheus for collecting distributed data and aggregate them. The monitoring data of the entire distributed system of fog nodes is accessed via an API from Prometheus. Furthermore, the monitoring data is used to perform the ranking of fog nodes to choose the place to place the serverless functions (Fog Function). The ranking mechanism uses Analytical Hierarchy Processes (AHP) to place the fog function according to resource utilization and saturation of fog nodes’ hardware. Finally, an experiment test-bed is set up with an image-processing application to detect faces. The effect of our ranking approach on the Quality of Service is measured and compared to the current FogFlow.