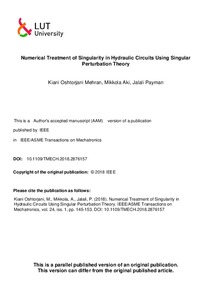 Hydraulic cylinders and motors are commonly used in actuator systems of mobile machines and industrial applications. Hydraulic actuators have the ability to offer large amounts of energy density. To analyze the dynamic behavior of a hydraulic actuator system, the hydraulic circuit is generally divided into volumes in which pressure is assumed to be equally distributed. The pressure within these volumes can be predicted by employing first-order differential equations. To achieve an accurate numerical presentation of a hydraulic circuit, pressures within very small volumes must often be calculated. The small volumes involved in the hydraulic circuits make the models numerically stiff, and consequently, a very small integration time-step is required. In this paper, the singular perturbation theory, which can be applied to problems in which a small value appears with singularity effects, is implemented as a computationally efficient method for modeling hydraulic circuits. The implementation is performed in two stages, i.e., the derivation of the perturbed equations and the modification of their effects. It is shown that the usage of a perturbation theory based approach alleviates problems associated with small volumes in hydraulic system modeling and substantially enhances computational efficiency, thus facilitating real-time simulation.