OpenMC modeling of the critical MYRRHA configuration : an emphasis in cross section homogenization 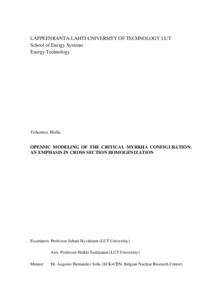 MYRRHA-ADS is a research reactor, which is under design and development by the Belgian Nuclear Research Center, SCK•CEN. The reactor will have innovative applications such as, transmutation of high-level waste via fast spectrum, radioisotope production and silicon doping using thermal neutrons moderated by water loops. It is the first of its kind to be accompanied by a particle accelerator and cooled by Lead-Bismuth eutectic (LBE).

The strongly heterogeneous nature of this reactor offers a rare opportunity to study both thermal and fast spectra. Given its unique character, a critical core configuration based on the MYRRHA-1.6 was chosen to investigate the capabilities of the state-of-the-art OpenMC Monte Carlo code in computing global and local 3D neutronic observables. Moreover, homogenized multi-group macroscopic cross sections were generated using OpenMC for further utilization in a deterministic core simulator.

Benchmarking of OpenMC with respect to a well-validated Monte Carlo code, MCNP at core level, is one of the novel works of this thesis. The keff difference and the relative difference of energy integrated flux in the active region were within acceptable range. In addition, a code verification between a homogenized multi-group Monte Carlo (MGMC) OpenMC model and the PHISICS deterministic simulator was carried-out. Here, a significant eigen value bias was observed. Further, a comparison was made between the continuous energy heterogeneous model and the MGMC model showed that there is a highly significant eigen value difference. Possible reasons for these biases were identified and possible ramification techniques are suggested.