Treatment of mining waters by electrocoagulation 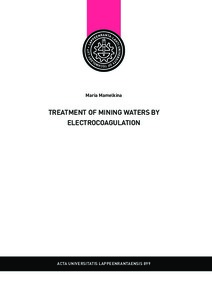 The mining industry is known to be one of the major contributors to the pollution of aquatic systems. The presence, in mining water, of various contaminants in relatively high concentrations (the most common cations being Fen+, Al3+, Si4+, Ca2+, Mg2+, Cu2+, Zn2+, Ni2+, Na+, K+ and anions Cl-, SO42-, NO3-, CO32-, HCO3-) can cause severe health problems, as well as hindering the reuse and recycling of process water. Currently, there are two approaches used in mining waters management. The first concept aims to reduce the concentrations of harmful dissolved contaminants to acceptable discharge levels. The basis for the second concept is the reuse and recycling of water within the process.

Among treatment methods, electrocoagulation (EC) is receiving more and more attention as an alternative technology to treat mining waters. Eventually, electrocoagulation may replace conventional technologies that require an addition of chemicals and an even higher energy consumption.

To ensure the suitability of electrocoagulation for the treatment of mining waters, the prime objective of this thesis was to investigate the removal mechanisms of sulfate and cyanide involved in EC-processes. Along with the removal mechanisms, parameters affecting the electrocoagulation process were investigated. 33-full factorial design and response surface methodology were implemented in order to systematically study the significance of process parameters (applied current, initial sulfate concentration and initial pH) and their combination on sulfate removal by electrocoagulation. In addition, EC performance using iron and aluminum electrodes was compared. Laboratory tests with both synthetic and real mining waters were performed. In terms of cyanide removal, the electrodes materials and electric charge were the main studied parameters.

Another research question was devoted to the development of a novel treatment concept based on continuous EC operation and solids recirculation. Established process resulted in a more efficient sulfate and metals removal as well as allowed operation at desired initial pH conditions comparing to the batch operation. The performance of this novel continuous treatment concept was compared with batch electrocoagulation and conventional chemical coagulation.

According to the results of this study, removal mechanisms of sulfate are different at neutral/base and acidic conditions, while the removal mechanisms of cyanide vary greatly, depending upon the material of the electrodes. Iron electrodes are more suitable for the EC-treatment of sulfate and cyanide rich waters. With iron electrodes, partial removal of sulfate and almost complete removal of cyanide were obtained. Under the studied conditions the iron species produced were positively charged favoring the removal of negatively charged ions. Most probably, the lower removal rates of studied contaminants with aluminum electrodes are due to the negatively charged species formed hindering the particle charge neutralization of anions.

In batch operation, the applied current and initial concentration of sulfate are the most critical parameters affecting the removal of sulfate by electrocoagulation, while the effect of initial pH is insignificant and mainly affects the formation of metal species. No matter what the initial pH of the solution, the EC-treatment took place at base conditions with final pH over 11. On the contrary, the initial pH of the solution had a pronounced effect for continuous EC tests, the initial pH remained constant and operation at acidic conditions improved the removal of sulfate.

In this study, received knowledge on sulfate and cyanide removal prove the suitability of electrocoagulation to treat mining waters. Awareness of the removal mechanisms makes the scale-up of the electrocoagulation process more robust and exact. For further process implementation, at industrial scale, there is a clear need to characterize the solids formed during the EC-process, to develop methods for sludge dewatering and recovery of valuable components from the sludge formed. In addition, there is a need to establish scale-up rules and validate the process at pilot and industrial scales. Having covered these considerations, it will be possible to conclude that electrocoagulation is a sustainable water treatment technology that meets all circular economy principles.