The Effect of Emerging Economies Operations on Knowledge Utilization: The Behavior of International Companies as Exaptation and Adaptation 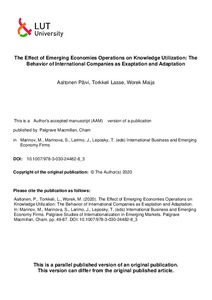 No one informed the dinosaurs that their thermal insulation could someday be useful for another purpose, yet their feathers developed into wings. This example describes exaptation, the discovery of new uses for existing traits; complementary to adaptation. The former, which is similar to opportunity recognition, and the latter, which follows environmental demands, are paths of knowledge utilization. Following the notion of exaptive repurposing of knowledge in internationalization, this study illustrates how internationalizing emerging markets change a firm’s behavior from adaptive to exaptive, offering a systematic theory to analyze organizational behavior in a variety of contexts. This study illustrates how a change from developed to emerging locations demands new uses for existing knowledge. This expansion creates further possibilities for additional expansions to developing economies in a similar state. This is particularly important since it illustrates how organizations from developed markets adopt a behavior more similar to ones originating from emerging markets, such as the capability to deal with political instability. However, this process can take a significantly long time. Therefore, we suggest exaptation is an essential concept in understanding organizational learning patterns in emerging markets and that capabilities learned in emerging economies can further leverage organizational capabilities in other emerging locations.