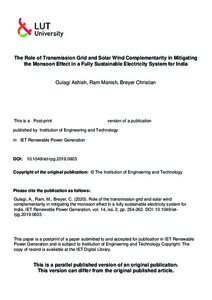 The Institution of Engineering and Technology

Various assessments have shown abundant renewable energy (RE) potential for India, especially solar. For a fully sustainable power system, monsoon presents an obstacle with the resultant decrease in solar resource availability. In this study, India is subdivided into ten regions, and these regions are interconnected via power lines. A 100% RE transition pathway in hourly resolution, until 2050, is simulated. The results from this paper indicate that the power system can overcome the monsoon hurdle by solar–wind complementarity and grid utilisation. Wind energy output increases in regions that have the best wind conditions with 62% of the total wind energy generated in monsoon. Solar photovoltaic (PV) and grids can manage the unavailability of wind resources in some of the regions. There is a clear indication that imports increase during the monsoon period. The least affected regions such as India-Northwest (IN-NW) can transmit PV electricity to other regions via transmission grids. In the monsoon period, grid utilisation increases by 1.3% from the non-monsoon period to satisfy the respective demand. The two major exporters of electricity, IN-NW and India-South export about 43% of electricity in the monsoon period. These results indicate that no fossil-based balancing is required in the monsoon period.