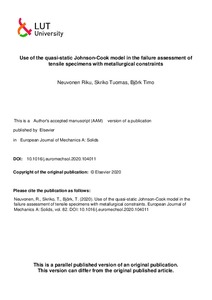 European Journal of Mechanics A: Solids

Direct quenching has recently been used to develop cost-effective novel high and ultra-high strength steels. In weldments made of these steels, a distinct soft zone, which can lower the ultimate strength and deformation capacity of the welded joint, can form in the heat affected zone of the joint. In order to accurately estimate the static strength and deformation capacity of a welded steel structure fabricated from these steels, the effect of this softening must be taken into account. In this study, the effect of the softened zone is explored based on round tensile test specimens with metallurgical constraints using experiments and numerical calculations. The applicability of the quasi-static part of the Johnson-Cook material model and failure model for fracture assessment under given conditions was hereby examined. Firstly, the material parameters were determined for direct-quenched armor steel and cold-formed structural steel using notched tensile test specimens and FE models combined with an optimization routine. A good agreement was achieved between the tests and the results from the FE models for the notched specimens. Specimens with metallurgical constraints were manufactured from the materials using rotational friction welding, and the corresponding FE models were created using the material parameters obtained from optimization. Two different fracture mechanisms were observed in the tensile tests conducted for the specimens with metallurgical constraints, namely cup and cone fractures at the center of the specimen and fractures near the weld interface. In the corresponding FE models, the fracture initiations were observed in the same areas. A good agreement between the FE models and experimental tensile tests was thus achieved in the case of the cup and cone fractures. However, the generated FE models underestimated the fracture displacement in the specimens where the fracture occurred near the weld interface.