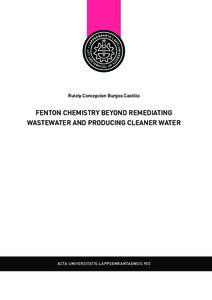 The production, use and transformation of inorganic and organic chemical compounds are negatively affecting the global environment, whereas the disposal of byproducts generated at urban wastewater treatment plants isbecoming factuallyregulated (Urban Water Treatment Council Directive 91/271/ EEC).As a result, alternative technologies like (electrochemical) advanced oxidation processes ((E)AOPs) have been investigated to reduce and eliminate the load of persistentpollutants from drinking water and wastewaters. In this regard, electrochemical technologies are considered a promising platform, not just to reduce different persistent pollutants by means of the in-situ production of oxidisingagents but also to generate compounds of added-value using waste streams.

In this research, the generation of oxidising agents like hydroxyl radicals was assessed in chemical and electrochemical processes with a special focus on electro-Fenton (EF) treatment indifferent environmental applications, because electrochemical methods are simple to operate and can be tuned to obtain conversion efficiencies that are not achieved in non-electrochemical systems. Electro-Fenton (EF) was studied for its ability to electrogenerate H2O2in-situ, in which catalytic amounts of Fe2+ions are added to react with H2O2via Fenton’s reaction. Firstly, experiments were performed following a kinetic model to determine optimal conditions for the quantification of hydroxyl radical using 1,2-benzopyrone (coumarin) and 5,5-dimethyl-1-pyrroline-N-oxide (DMPO). Secondly, the continuous electrochemical production of hydrogen peroxide was applied to mineralise bisphenol A. In addition, EF was studied as sludge washing technique to treat diluted samples of anaerobically digested sludge from a municipal wastewater treatment plant (WWTP). In this piece of work, selected chemical elements were monitored, including Cr, Cd, Fe, Zn and P. Their performance was thus compared with those of acidification at pH 3.0, added Fenton’s reagent and aeration. Finally, a novel electrochemically-assisted route was studied to generate nanoparticles where pure crystalsof iron oxideslike magnetitewere identified. Overall, it was observed that the in-situ production of oxidising agents like H2O2and •OH can remediate and transform synthetic and actual effluents, with the potential of producing added-value compounds.