Evaluation and optimization of a vertical form, fill and seal production machine for flexible packaging papers 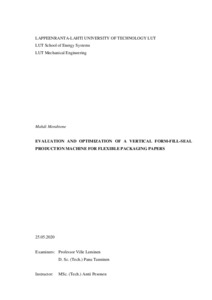 Vertical form fill seal machines are commonly used in packaging industries to produce pillow and block bottom bags for dried products. This research evaluated and optimized the machine for fiber-based materials and compared the runnability with thermoplastic material using three different sealing tool profiles with 140 mm width forming shoulder. There are three main heat sealing parameters, sealing temperature, dwell time and sealing pressure. Each of these parameters can influence the seal quality significantly to achieve satisfactory seal strength, airtightness and adhesive bond. The initial task investigated and developed the heat sealing processing window between the seal strength and sealing parameters (sealing temperature and dwell time) using contour plots and 3D mapping relationships. The peel strength test was conducted using T-peel method with 90° pulling direction at constant rate of 300 mm/min with Shimadzu AGS-1kNX. The test samples were prepared as per the ASTM F88 guidelines. Three major failure modes were observed from the peel test. At low temperatures, about 100 °C, most of the materials experienced easy peel because the seal strength is lower than the strength of the adhesive layer. At higher temperature, above 110 °C, the molecules forms interdiffusion of chains leading to delamination and separation of seal from the sealing layer or in worst case, the material gets teared at the edge of the seal. Detailed analysis with each materials and corresponding sealing tool is thoroughly explained in the report. After the production of pillow bags, major wrinkles were observed on the surface of the bags due to sharp bending angle and fillet edge of the forming shoulders. 3D profilometer, Keyence VR 3200, was used to examine the surface roughness. The roughness value tripled on average with Fiber 85 and quadrupled with Fiber 120 because the Fiber 85 has lower stiffness and more flexibility than Fiber 120. Several suggested improvements and suggestions for future tests are further discussed.