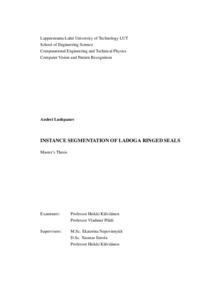 The wildlife photo-identification is an important issue today since it allows to identify and to track animals. It helps scientists to monitor the endangered species, although it is difficult to explore all the image volumes. The first step in the identification pipeline is to segment the depicted animals. Thus, the goal of the thesis is the segmentation of the Ladoga ringed seals. The similar problem has been solved for the Saimaa ringed seals using the binary segmentation method, but this approach does not fit to the task since the Ladoga seals are typically captured in groups. So, the instance segmentation method is needed since it distinguishes the objects presented. Convolutional Neural Networks (CNNs) are known as highly efficient approaches in this field. That is why, Mask R-CNN was selected as a method to study. Six models built on various architectures were trained and evaluated on the sets of manually annotated images. Finally, the experiments showed that the ResNet architecture with feature pyramid was the best approach for segmentation,while ResNet with dilated convolutions was the most accurate at counting the seals.