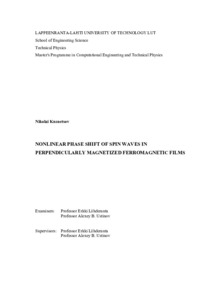 This work is devoted to the theoretical and experimental investigations of the nonlinear phase shift of spin waves in perpendicularly magnetized ferromagnetic films. In contrast to earlier works, the nonlinear phase shift of a small-signal forward volume spin wave induced by an intensive forward volume spin wave with another carrier frequency was first studied. The theoretical model describing this phenomenon was developed utilizing the envelope method and based on the developed theory a computer program was written in a math software. The program gives numerical simulation of the amplitude and phase evolution of two spin waves simultaneously propagating in a magnetic film. Experimental investigations were carried out using an original measurement technique. A comparison of the dependencies obtained experimentally and simulated by the program was conducted.