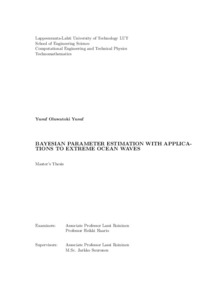 Sea state observations decomposed into a wave spectrum model is one direct way of monitoring ocean dynamics with the aid of statistical methods. The frequentist and Bayesian methods play prominent roles in estimating the parameters of this mathematical model. The Bayesian method forms a complete framework for statistical inference and essentially incorporates procedures from the frequentist method. The Bayesian method also uses Markov Chain Monte Carlo (MCMC) sampling method to approximate the posterior distribution of the parameters estimated. The MCMC sampling quantifies uncertainty in the estimates from a stochastic process hence efficient for decision making. In this work, five toy-case examples of the stochastic Lagrange wave processes realised from the Pierson-Moskowitz spectrum were considered. An extension to real ocean scenario was deemed necessary thus two data cases sourced from Wafo group toolbox were also considered. The data used were the North Sea data recorded at the Gullfaks C platform in Norway and the Sea of Japan data recorded at the Poseidon platform in Japan. The parameters of the wave realisations; significant wave height and peak period were estimated using the frequentist and the Bayesian approach. The Delayed Rejection with Adaptive Metropolis (DRAM) MCMC algorithm simulated for 15000 steps was used to quantify the uncertainty in the estimates. It was found that both methods of estimation were consistent with the DRAM MCMC results and the true parameters. However, the North Sea data case did not look too promising as the DRAM MCMC predictive envelope differs slightly from the true parameter values of the data.