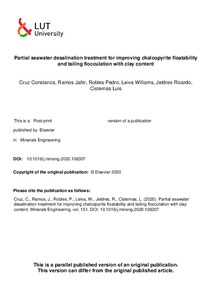 The declining grades of copper ore associated with the additional processing of clay-based minerals and the use of seawater are problems that copper mining companies are currently facing, where froth flotation and tailing management operations become challenging for operators. In both cases, the detrimental effect is intensified by the presence of calcium and magnesium ions in seawater and their precipitation under alkaline conditions. This research proposes a partial seawater desalination treatment to improve the flotation and thickening performance in clay-containing ore. The proposed seawater treatment promotes the removal of calcium and magnesium ions using carbon dioxide gas and a sodium hydroxide solution. Flotation tests were conducted in a batch cell using synthetic minerals composed of mixtures of chalcopyrite, kaolin, and quartz. Meanwhile, tailings settling assays were performed in a PTFE 30 mm turbine type stirrer with an in-situ characterization of aggregates (using a focused beam reflectance measurement (FBRM) probe). The results showed an improvement in flotation and flocculation performance when tests were carried out with treated seawater at pH > 10.5, where the copper recovery increased from 82% to 95%, compared to seawater without salt removal; meanwhile, the settling rate of flocculated tailing increased from 5.0 m/h to 11.5 m/h. As expected, the sedimentation outcomes showed a clear relationship with the aggregate size. In this context, the partial seawater desalination treatment could be a promising alternative to face the challenges generated by clays and seawater for copper mining companies.