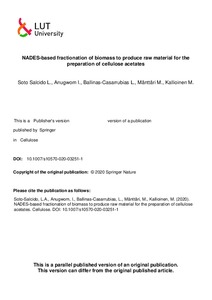 Waste biomass (agave bagasse) and native birch wood were used as raw materials for a novel fractionation and derivation process to produce cellulose acetates (CAs). During the first stage of the fractionation process, a significant amount of hemicelluloses and lignin were dissolved from the biomass using a natural deep eutectic solvent (NADES) that consisted of a mixture of choline chloride and lactic acid with the molar ratio of 1:9. Then, the residual solid material was delignified by bleaching it with a mixture of acetic acid and sodium chlorite. The fractionation process generated differently purified pulps (celluloses) which were converted to CAs. The crystallinity index, polymerization degree, chemical composition, and thermal properties of the differently purified pulps and CAs were analyzed to evaluate the efficacy of the acetylation process and to characterize the CAs. The chemical derivation of the differently purified cellulose samples generated CAs with different degrees of substitution (DSs). The more purified the cellulose sample was, the higher its DS was. Moreover, some differences were observed between the acetylation efficiencies of birch and agave bagasse. Typically, cellulose purified from birch by treating it with NADES followed by bleaching was acetylated more completely (DS = 2.94) than that derived from agave bagasse (DS = 2.45). These results revealed that using green solvents, such as NADES, to treat both agave bagasse (waste biomass) and birch wood, allowed pure fractions to be obtained from biomass, and thus, biomass could be valorized into products such as CAs, which present a wide range of applications.