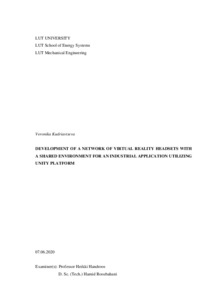 VR technology was widely introduced to the public by gaming industry in the recent decade, and the technology then was further utilized in other areas, such as education, healthcare, construction, and automotive industries, to name a few. This work is focused on development of a virtual environment with a network of VR headsets for an industrial application as current VR applications for industrial use lack of interactions and teamwork.

The obtained performance results and feedback from users testing the environment confirm that environment provides smooth VR experience with average frame rate above 90 FPS, clear networked sound, and movements. Possible applications of the environment include the education industry in general, facility planning and advertising purposes for the real factory in particular.