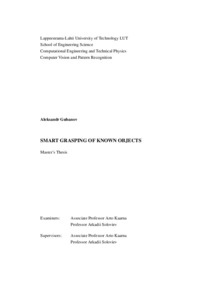 Smart grasping means that a robot can automatically decide which object and how an object can be grasped. Firstly, a neural network should find the objects and get a 2D bounding box. The convolution neural network is used for processing the frames to detect the objects. Secondly, a proposed approach should support the robot to understand where it is possible to grasp the object. The decision should be done independently and autonomously such that reliable grasping becomes possible. In the experiment there are only a limited set of known objects. The quick addition of new objects is possible since an automatic process for extracting new objects from video was developed. The result of the thesis provides an automated system which connects the recognition system and the robot.