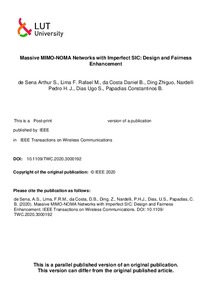 This paper addresses multi-user multi-cluster massive multiple-input-multiple-output (MIMO) systems with non-orthogonal multiple access (NOMA). Assuming the downlink mode, and taking into consideration the impact of imperfect successive interference cancellation (SIC), an in-depth analytical analysis is carried out, in which closed-form expressions for the outage probability and ergodic rates are derived. Subsequently, the power allocation coefficients of users within each sub-group are optimized to maximize fairness. The considered power optimization is simplified to a convex problem, which makes it possible to obtain the optimal solution via Karush-Kuhn-Tucker (KKT) conditions. Based on the achieved solution, we propose an iterative algorithm to provide fairness also among different sub-groups. Simulation results alongside with insightful discussions are provided to investigate the impact of imperfect SIC and demonstrate the fairness superiority of the proposed dynamic power allocation policies. For example, our results show that if the residual error propagation levels are high, the employment of orthogonal multiple access (OMA) is always preferable than NOMA. It is also shown that the proposed power allocation outperforms conventional massive MIMO-NOMA setups operating with fixed power allocation strategies in terms of outage probability.