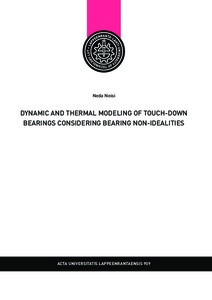 In addition, an experimental and numerical study on the dropdown of a rotor is presented. The recorded behavior of the rotor in the sudden failure of the electromagnetic field is demonstrated. A comparison between simulation results and dropdown test data can help the further development of the model. This was achieved in this study by considering the dropdown test data to determine the initial position of the rotor at the start of dropdown as well as the support properties. The machine was not equipped with force sensors for the touchdown bearing. Non-contact displacement sensors were provided for monitoring the displacement of the rotor, which make it difficult to evaluate a safe dropdown. The model was verified by comparing the rotor orbits in the simulation and measurements. The Fast Fourier Transform (FFT) was applied to the measured displacement of the rotor and revealed the harmonics of the operation speed, rub-impact frequencies, pendulum motion of the rotor, as well as the first two bending frequencies of the rotor as it settled on the touchdown bearings. A critical speed map justified the bending frequencies of the rotor and identified the support properties. The study enables the comparison of a single dropdown in relation to a previous drop.