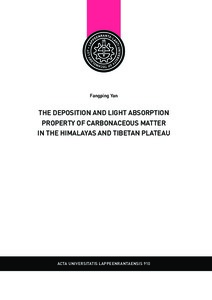 The Himalayas and Tibetan Plateau (HTP), known as the ―Third Pole‖ and ―world roof‖, contains the largest amount of glaciers outside the Arctic and Antarctic. Carbonaceous matter, mainly including black carbon (BC) and organic carbon (OC), plays important role in climate forcing of the atmosphere and glacier retreat after its deposition on the glacier surface in the HTP. With the rapid climate change and glacier retreat, the study on carbonaceous matter in the HTP has become a hotspot in recent few decades. Although a series of studies on carbonaceous matter in the atmosphere and glacier regions of the HTP have been conducted, large uncertainties still existed. Therefore, this work was carried out to first discuss the uncertainties in previous studies and adjust the reported data of carbonaceous matter in the HTP. Then in-situ observations were conducted at three remote stations and an urban site in the HTP to comprehensively investigate reliable concentrations and deposition rates of carbonaceous mater in precipitation, and the atmospheric dry deposition rates of particulate carbon. Meanwhile, the scavenging mechanisms of carbonaceous matter in the atmosphere were discussed. Furthermore, the OC, especially the water-insoluble fraction, exerts strong light absorption particularly in the UV wavelength rage. However, the methods in previous studies to investigate the light absorption of this water-insoluble organic carbon (WIOC) have large uncertainties. To accurately estimate its light absorption, the uncertainties in previous methods to extract WIOC with methanol were discussed, and a new method was developed in this work.

The results in this work indicated that the previously reported concentrations of the atmospheric BC and OC were overestimated due to the influence of inorganic carbon (e.g. carbonate) in mineral dust because of the wide distribution of arid and desert regions across the HTP. Thus, the previously reported BC concentrations at two remote stations of the HTP, Nam Co and Everest were adjusted to 61 and 151 ng m-3, respectively. Meanwhile, the previous BC atmospheric deposition rates estimated using the lake cores were also overestimated due to the large contribution of catchment input. An average BC deposition rate of 17.9±5.3 mg m-2 yr-1 in glacier regions of the HTP was then reached using the relatively consistent data from snow pits and ice cores.

The mass absorption cross-section (MAC) of precipitation DOC which represented the light absorption of DOC from the cloud altitude to the near surface was consistently lower than those of the corresponding near-surface aerosols (i.e., MAC of water-soluble OC (WSOC)) at three remote stations. Additionally, by comparing the previous methods with the one we proposed to extract atmospheric OC with methanol, we found that the previous extraction methods ignored the particulate carbon detachment and largely overestimated the methanol-soluble OC (MeS-OC) mass, leading to the underestimation of its MAC value. However, the new method can avoid this problem, and it was found that OC could be extracted by methanol in a short time; the sonication and long-term soaking in previous studies did not significantly increase the amount of methanol extractable OC. Therefore, this new method could quantitatively provide reliable light absorption of atmospheric OC. The MAC values of WIOC at 365 nm by this new method were approximately 2.3 and 1.6 times higher than the values of WSOC for the biomass and ambient aerosols, respectively, in this study, indicating that WIOC was more representative than WSOC acting as proxy of brown carbon. Thus, further related work should be carried out to obtain a comprehensive understanding of the light absorption of OC in both the atmosphere and glaciers after deposition facilitating the estimate of the corresponding climate change caused by OC. This work reported the in-situ data of WIOC, BC and DOC concentration and deposition in the HTP for the first time, and proposed a new method to obtain the reliable light absorption of OC.