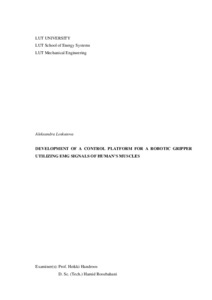 For industrial robots at a factory, repetitive actions are satisfactory. However, in a dangerous situation, such as a building collapse, difficult climatic conditions, or any other life-threatening conditions, it is safer to send a robot instead of a human to perform tasks. In this case, the robot must react according to circumstances. There are several ways to control a robot. This study concentrates on the control based on the repetition of human movement. This type of control was chosen because of its intuitive approach. The research was performed in the laboratory of intelligent machines at LUT University. The control object of this study was three-finger gripper by Robotiq, for obtaining EMG signals from muscles that used to control the gripper the Trigno wireless biofeedback system by Delsys was chosen. During this research, the control platform was developed based on the LabVIEW environment which allows to perform three main gripper movements: open, close, and change in scissor position. The evaluation showed a good reaction on open-close movement, the reaction on change in the angle between the index and the middle fingers has to be improved. Possible methods to increase accuracy are presented in the research. Also, the concept of future development of the system is described in this study.