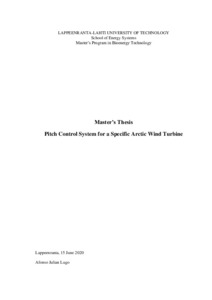 The expansion of renewable sources for energy generation is led by wind energy with 204.8 GW of cumulative installed capacity in Europe at the end of 2019. Regions of high altitude or latitude, such as Northern and Central Europe, Northern America and Asia have wind plants operating in cold climates and they are exposed to atmospheric ice, which causes problems for the wind turbine, such as increase of mechanical loads, premature shut down, reduction of lifetime of the components and power losses. Accumulation of ice on turbine’s blades changes the airfoil’s shape, rotor’s balance and interaction between wind and blades. An investigation of the icing effects on power production is conducted to estimate power production losses and to propose a method to reduce losses and to improve energy efficiency under icing conditions based on the pitch control system. This strategy is applied in a study case for several locations in Finland and Russia, countries that have operational turbines and potential for new wind power in icing condition. Weather parameters data from MERRA2 and CFSv2 is used to simulate site operation. Conditions for atmospheric ice are set according to previous studies about ice accretion. Results show power losses between 21.2% and 28.5% for the region where pitch control is not actuating, and the optimization method reduced these losses from 15.7% and 15.3%, accordingly. In the study case, conditions for atmospheric ice varied from 1221 to 2596 hours of icing per year with yearly mean losses varying from 0.18% to 2.1%. The proposed optimization method decreased monthly mean losses up to 2.6% in severe cases. Power curve of the optimized case reduced the icing component and the power production was improved in comparison to the non-optimized case. This research contributed to the scientific field of wind energy with a new methodology to reduce power losses and to improve energy efficiency.