Energy transition options for Bolivia in a climate-constrained world 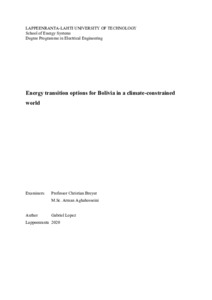 Under the Paris Climate Agreement, sustainable energy supply will largely be achieved through renewable energies. Each country will have its own unique optimal pathway to transition to a fully sustainable system. The first chapter of this thesis demonstrates two such pathways for Bolivia that are both technically feasible and cost-competitive to a scenario without proper renewable energy targets, and significantly more cost-efficient than the current system. This transition for Bolivia would be driven by solar PV based electricity and high electrification across all energy sectors. Simulations performed using the LUT Energy System Transition model comprising 108 technology components show that electricity demand in Bolivia would rise from the present 12 TWh to 230 TWh in 2050, and electricity would comprise 82% of primary energy demand. The remaining 18% would then be covered by renewable heat and sustainable biomass resources. Solar PV sees massive increases in capacity from 0.13 GW in 2020 to a maximum of 113 GW in 2050, corresponding to 93% of electricity generation in 2050. In a high transmission scenario, levelised cost of energy reduces 27% during the transition. All scenarios studied see significant reductions in greenhouse gas emissions, with two scenarios demonstrating a Bolivian energy system with no greenhouse gas emissions in 2050. Further, such scenarios outline a sustainable and import-free supply of energy for Bolivia that will provide additional social benefits for the people of Bolivia.

As the discourse surrounding 100% renewable energy systems has evolved, several energy system modelling tools have been developed to demonstrate the technical feasibility and economic viability of fully sustainable, sector coupled energy systems. While the characteristics of these tools vary among each other, their purpose remains consistent in integrating renewable energy technologies into future energy systems. The second chapter of this thesis examines two such energy system models, the LUT Energy System Transition model, an optimisation model, and the EnergyPLAN simulation tool, a simulation model, and develops cost-optimal scenarios under identical assumptions. This chapter further analyses different novel modelling approaches used by modellers. Scenarios are developed using the LUT model for Sun Belt countries, for the case of Bolivia, to examine the effects of multi and single-node structuring, and the effects of overnight and energy transition scenarios are analysed. Results for all scenarios indicate a solar PV dominated energy system; however, limitations arise in the sector coupling capabilities in EnergyPLAN, leading it to have noticeably higher annualised costs compared to the single-node scenario from the LUT model despite similar primary levelised costs of electricity. Multi-nodal results reveal that for countries with rich solar resources, high transmission from regions of best solar resources adds little value compared to fully decentralised systems. Finally, compared to the overnight scenarios, transition scenarios demonstrate the impact of considering legacy energy systems in sustainable energy system analyses.