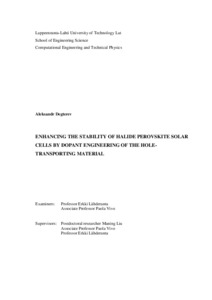 The presence of the conventional hygroscopic dopants in the hole-transporting material (HTM) of perovskite solar cells (PSCs) is a major culprit of the mediocre stability of the devices. In this work, an alternative dopant called F4-TCNQ was employed in the most widely used HTM in PSCs, i.e. Spiro-OMeTAD. The impact on the efficiency and stability of PSCs was studied when F4-TCNQ replace the conventional dopants of Spiro-OMeTAD. This is the first time that F4-TCNQ is adopted in a mesoscopic n-i-p PSC structure. After tuning the concentration of F4-TCNQ with respect to Spiro-OMeTAD (in the range of 1-6 mol%), it was concluded that 2 mol% of F4-TCNQ is the optimum concentration that can lead to the highest power conversion efficiency of 14.3% and the most stable devices. The new dopant-based devices have promisingly shown also enhanced stability compared to that of conventional dopants-based cells after 112 days of storage in identical conditions. This work provides significant hints to address one of the biggest challenges of PSCs technology.