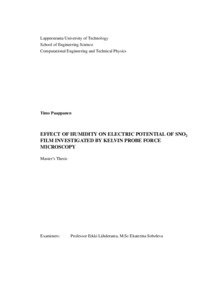 In this study hygroelectric behaviour of an SnO2 sample was studied using Kelvin probe force microscopy (KPFM) and humidity controlling equipment. The objective was to detect any possible surface potential changes within scans, and furthermore any possible patterns to the potential changes by analysing data from multiple different sets of scans. Due to time limitations only one sample could be scanned and it could not be ensured that the scans could be taken from the same area. Analysis of the results revealed potential changes individually within each scan set. However no common pattern to the variation were found.