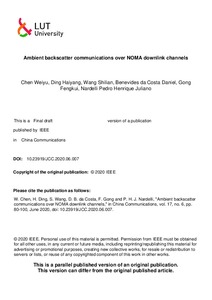 In this paper, we investigate the performance of commensal ambient back-scatter communications (AmBC) that ride on a non-orthogonal multiple access (NOMA) downlink transmission, in which a backscatter device (BD) splits part of its received signals from the base station (BS) for energy harvesting, and backscatters the remaining received signals to transmit information to a cellular user. Specifically, under the power consumption constraint at BD and the peak transmit power constraint at BS, we derive the optimal reflection coefficient at BD, the optimal total transmit power at BS, and the optimal power allocation at BS for each transmission block to maximize the ergodic capacity of the ambient backscatter transmission on the premise of preserving the outage performance of the NOMA downlink transmission. Furthermore, we consider a scenario where the BS is restricted by a maximum allowed average transmit power and the reflection coefficient at BD is fixed due to BD's low-complexity nature. An algorithm is developed to determine the optimal total transmit power and power allocation at BS for this scenario. Also, a low-complexity algorithm is proposed for this scenario to reduce the computational complexity and the signaling overheads. Finally, the performance of the derived solutions are studied and compared via numerical simulations.