A new method for extraction of methanol-soluble brown carbon: Implications for investigation of its light absorption ability 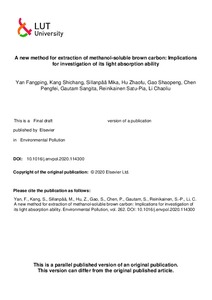 As an important component of organic carbon (OC), brown carbon (BrC) plays a significant role in radiative forcing in the atmosphere. Water-insoluble OC (WIOC) generally has higher light absorption ability than water-soluble OC (WSOC). The mass absorption cross-section (MAC) of WIOC is normally investigated by dissolving OC in methanol. However, all the current methods have shortcomings due to neglecting the methanol insoluble particulate carbon that is detached from the filter and suspended in methanol extracts, which results in MAC uncertainties of the methanol-soluble BrC and its climate warming estimation. In this study, by investigating typical biomass combustion sourced aerosols from the Tibetan Plateau and ambient aerosols from rural and urban areas in China, we evaluated the light absorption of extractable OC fraction for the existing methods. Moreover, a new method was developed to overcome the methanol insoluble particulate carbon detachment problem to achieve more reliable MAC values. We found that OC can be dissolved in methanol in a short time (e.g., 1 h) and ultrasonic treatment and long-term soaking do not significantly increase the extractable OC fraction. Additionally, we proved that methanol insoluble particulate carbon detachment in methanol does exist in previous methods, causing overestimation of the BrC mass extracted by methanol and thus the underestimation of MAC values. We therefore recommend the newly developed extraction method in this study to be utilized in future related studies to quantitatively obtain the light absorption property of methanol-soluble BrC.