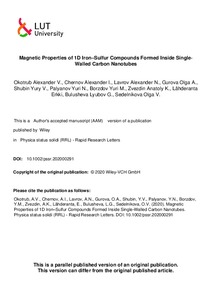 Herein, the filling of single‐walled carbon nanotubes (SWCNTs) with sulfur is performed, and the magnetic properties of the formed nanomaterials are studied. Encapsulation of sulfur species results in the appearance of a specific magnetic ordering in the system due to the formation of nanoscopic grains composed of sulfur and residual catalytic Fe nanoparticles contained in the SWCNTs. The magnetic character of the obtained 1D nanostructures is studied using superconducting quantum interference device (SQUID) magnetometer and a sequential ferromagnetic–antiferromagnetic ordering in the material is revealed. Magnetic and optical properties are strongly dependent on the synthesis protocols. A significant Raman intensity increase related to the encapsulated nanostructures is obtained when filling is performed at high‐pressure high‐temperature conditions. Simultaneously, the magnetic susceptibility gets strongly reduced for high‐pressure filling, which is related to the escape of iron particles from the nanotube interior, and the magnetic properties of the material are governed by a weak ferromagnetic ordering of Fe–S structures remained inside SWCNTs. Sulfur encapsulation provides the new route for controlling the magnetic properties in 1D nanomaterials that pave the way for advanced magneto‐optical applications.