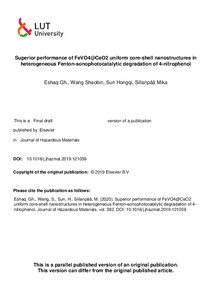 Porous FeVO4 nanorods decorated on CeO2 nanocubes (FeVO4@CeO2) were successfully prepared via a facile hydrothermal route and tested in the degradation of 4-nitrophenol (4-NP) for enhanced heterogeneous oxidation using ultrasonic (US), ultraviolet (UV), and binary irradiation US/UV, respectively. The nanostructure of the core-shell FeVO4@CeO2 was characterised using XRD, SEM, EDS elemental mapping, TEM, HRTEM, SAED, FTIR, Raman, BET, point of zero charge (PZC), XPS analysis and UV–vis DRS. The effect of various parameters, for examples, nanostructured core-shell amounts, hydrogen peroxide concentration, initial concentration, pH and irradiation time, on 4-NP degradation were investigated for the optimisation of the catalytic performance. The durability and stability of the core-shell nanostructured materials were also investigated and the obtained results revealed that the catalysts can endure the harsh sonophotocatalytic conditions even after six cycles. Mineralisation experiments were investigated using the optimised parameters. The core-shell nanostructured FeVO4@CeO2 has higher PZC than pure FeVO4 and CeO2, leading to excellent sonophotocatalytic activity even at high pH and stability for the degradation of 4-NP after six cycles. A possible mechanism over the FeVO4@CeO2 was proposed based on the special three-way Fenton-like mechanism and the dissociation of H2O2 with the experiments of active species trapping and calculated band gap energy.