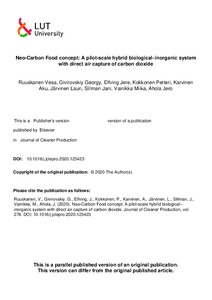 The pace at which the human population is growing raises serious concerns related to food security while at the same time conventional agriculture-based food production is becoming a major cause of environmental pollution and greenhouse gas emissions. Numerous solutions have been proposed to boost food production among which edible microbial biomass is considered a promising alternative to conventional sources of food and feed with lower environmental footprint. This work introduces the Neo-Carbon Food concept that is a pilot-scale hybrid biological–inorganic process suitable for the production of microbial biomass. The concept includes integrated hydrogen production by water electrolysis, direct air capture (DAC) of carbon dioxide, and its subsequent assimilation by autotrophic hydrogen-oxidizing bacteria (HOB). The hydrogen production with in situ electrolysis achieved specific energy consumption just below 100 kWh/kgH2 while the specific energy consumption of DAC was around 20 kWh/kgCO2.