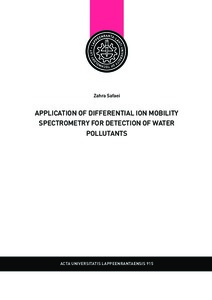 Intentions to utilize differential ion mobility spectrometry (DMS) for environmental applications including the monitoring of volatile organic compounds (VOCs) or semivolatile organic compounds (SVOCs) in aqueous media such as surface waters or ground waters are encouraged by robust technology, stable calibrations, trace detection limits, rapid analyses, and favourable response to VOCs and SVOCs. One embodiment of IMS known as differential mobility spectrometry (DMS) is particularly attractive due to simplicity, affordability, and combability to directly flows containing elevated levels of moisture from aqueous samples.

At moistures of 1×102 to 1×103 ppmv, peak separation in mobility spectra from a DMS analyser at 30°C was improved due to changes in alpha functions which describe ion mobility coefficient dependences on electric field strength of the separation waveform. At vapor concentrations of 7 ppb for ketones with carbon number 6 to 12, increases in moisture also resulted in lower relative abundances for proton bound dimers, M2H+(H2O)n, and larger abundances for protonated monomers, MH+(H2O)n. This arose from the influence of moisture on the chemistry of ionization in the source of the analyser. This monotonic change with abundance of the proton bound dimers continued with increased moisture until 1.5×103 ppmv after which no signal was observed. The abundance of protonated monomer was less with increased moisture from 1.5×103 to 6 ×103 ppmv when no further response was observed. These changes can be attributed to increases in proton affinity of the reactant ion, H+(H2O)n, with increased moisture and distributions of ionization equilibria. Computed values for proton affinity were 691 to 1256 for n =1 to 10 and were consistent with literature values.

Consequently, analysers intended for monitoring aqueous sources and based on this ambient temperature DMS should have interfaces engineering to regulate moisture from 5×102 to 1×103 ppmv in the ion source. A model to interpret response in DMS was matched and validated against an independent expansive data set with a conventional designed IMS drift tube from 1 to 1×104 ppmv, temperature of 30 to 175°C, and 14 VOCs from five chemical classes.