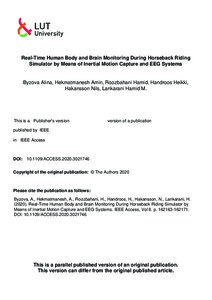 One type of effective muscular disorders therapy is horseback riding. The main objective of the present study is developing a physiotherapeutic simulator (concept proof) instead of a real horse though employing the Electroencephalography (EEG) amplifier and inertial motion capture system (IMCS). In the experiment, the professional and non-professional rider’s body movements and brain-behaviors monitored during the horseback riding simulator. The computational analysis for identifying the alterations of the pelvic area activity among two group riders were considered based on the IMCS. The EEG system was used for investigating the brain signals of the experienced horseback rider who had never experienced using horse simulator. For this purpose, the following experiments were handled, representing body and brain-behavior. As a result, it was concluded, that inexperienced horseback riders tend to make movement mistakes while riding a simulator, which may cause asymmetry shift in external hip and back regions. The study of EEG shows that the frontal lobes, which are responsible for intelligence and concentration were activated. Also, the temporal and the parietal areas of the brain which are responsible for movements and vision were activated significantly, respectively.