Failure of confined granular media due to pullout of an intruder: from force networks to a system wide response 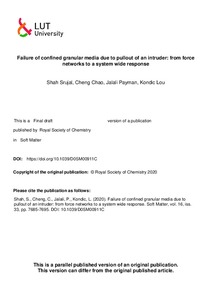 We investigate computationally the pullout of a spherical intruder initially buried at the bottom of a granular column. The intruder starts to move out of the granular bed once the pulling force reaches a critical value, leading to material failure. The failure point is found to depend on the diameter of the granular column, pointing out the importance of particle–wall interactions in determining the material response. Discrete element simulations show that prior to failure, the contact network is essentially static, with only minor rearrangements of the particles. However, the force network, which includes not only the contact information, but also the information about the interaction strength, undergoes nontrivial evolution. An initial insight is obtained by considering the relative magnitudes of normal and tangential forces between the particles, and in particular the proportion of contacts that reach Coulomb threshold. More detailed understanding of the processes leading to failure is reached by the analysis of both spatial and temporal properties of the force network using the tools of persistent homology. We find that the forces between the particles undergo intermittent temporal variations ahead of the failure. In addition to this temporal intermittency, the response of the force network is found to be spatially dependent and influenced by proximity to the intruder. Furthermore, the response is modified significantly by the interaction strength, with the relevant measures describing the response showing differing behaviors for the contacts characterized by large interaction forces.