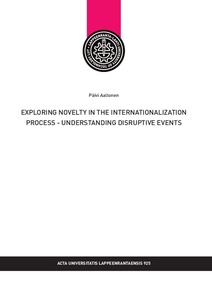 The literature on international business combines a multitude of paradigms from organizational learning to entrepreneurship and economic theories. The behavior-based model of the internationalization process (IP) theory, the Uppsala model, has since the 1970s served as a starting point for understanding the process of internationalization, further contributing to the emergence of the international new ventures and born global theory constructs. However, illustrating disruptive, novel, and quirky events in the IP could benefit from additional approaches. Introducing new theory constructs could potentially explain in more detail some of the remaining differences in the current theory constructions. These include explaining the differences in the speed of internationalization, creating joint theory constructs for both small and medium-sized and multinational enterprises, and enabling a more clarified characterization of ambiguous concepts. Recently, a term beneficial for understanding disruptive events in internationalization was introduced, the concept of exaptation. Describing phenomena such as the development of wings, the fairly unknown concept in economics has been linked to describing entrepreneurial behavior, innovation creation, and the emergence of heterogeneity in markets and unpredictable developmental patterns. To assess the explanatory potential of the concept, a thorough review and analysis of current literature in internationalization as well as exaptation is needed. Further, to demonstrate the applicability of the concept in the field of international operations, empirical studies should be conducted. This dissertation contributes to internationalization process theories by highlighting how the origins of novel solutions can be addressed, and why intentions may differ from realized outputs. Thus, it demonstrates tools and theories to promote the study of internationalization, responding to calls made in the literature.