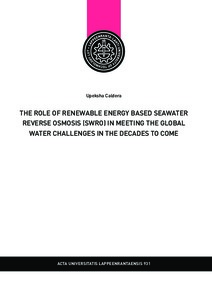 Renewable energy (RE) powered desalination is rapidly gaining interest as a means to augment the increasingly stressed global water supply. This thesis introduces and describes the ways in which 100% RE-based seawater reverse osmosis (SWRO) desalination can be used to help overcome the world’s water issues. Concerns within the desalination industry about switching to solely RE sources are tackled, and new ways of using desalination with better water management added. The results of this thesis clearly show that desalination demand across many regions will increase and adopting 100% Rebased desalination can help assuage global water stress. Ultimately, by addressing the issues of water stress, water demand management in the irrigation sector, and the transition to RE resources, the research establishes pathways to achieve the United Nations Sustainable Development Goals 2, 6 and 7.

In addition to assessing the potential for desalination, the costs of running an entirely Rebased global desalination sector was analysed. The LUT Energy System modelling (ESM) tool, designed in an hourly temporal and 0.45˚ x 0.45˚ spatial resolution, is a linear optimisation model with the objective of minimising the annual costs of the energy system. An initial overnight study, representative of the characteristics of a steady-state simulation, on a global scale for the year 2030, showed that it was possible to run 100% RE-based SWRO desalination at costs competitive with the current fossil-based desalination sector. These results were further supported by a country specific study on the role of RE-based SWRO desalination in Iran. Despite being ranked as one of the ten most water stressed countries in the world, RE-based desalination can allow Iran to provide potable water at a cost range of 1.0 €/m3 – 3.5 €/m3 by the year 2030. These costs also include the water transportation costs which play a significant role due to the mountainous terrain of Iran.

The overnight results led to work on the transition pathways which allow countries to achieve an entirely RE-based desalination industry by 2050. Saudi Arabia was chosen as a case study. The transition pathway was modelled such that the current fossil fuel-based power, desalination and industrial gas sectors would be run entirely by RE resources by 2050. The installation of SWRO and the thermal Multiple Effect Distillation (MED) technologies were optimised to meet the projected desalination demand. The transition enabled the average levelised cost of water (LCOW) in Saudi Arabia to decrease from 3 €/m3 in 2015 to 0.66 €/m3 in 2050. The corresponding decrease in the levelised cost of electricity (LCOE) was from 139 €/MWh in 2015, assuming unsubsidised gas and oil costs, to 40 €/MWh by 2050 in a 100% RE-based energy system. Solar PV and battery storage played significant roles in enabling the Saudi Arabian transition in a cost optimised manner.

The hypothesis that desalination could provide additional flexibility to a RE-based system was also investigated. This was done by modelling the energy systems transition pathway for the desalination, power and industrial gas sectors of Saudi Arabia in integrated and non-integrated scenarios. The observed role of SWRO desalination and water storage during the Saudi Arabian transition alluded to the fact that SWRO plants do not offer the flexibility initially thought possible. Through additional analysis, it was observed that the relatively high capex of SWRO desalination plants does not allow this component to operate in a flexible way. While SWRO plants can technically be operated in a flexible manner, the results showed that it does not make economic sense to do so. The desired energy system flexibility can be offered on a lower cost level by PV power plants and battery storage, while SWRO plants are run in a baseload mode.

As SWRO desalination becomes a crucial part of the global water supply, it is necessary to be able to project the future cost trends. In this thesis, the first learning curve for SWRO capital expenditures (capex) is presented. While the learning curve has been used by different industries for cost projections, it has not yet been applied to the desalination industry. It was found that the SWRO capex has decreased by 15% for every doubling of cumulative online SWRO capacity, implying a learning rate of 15% for SWRO plants. The decreasing costs in RE technologies, coupled with the decreasing costs of SWRO plants, indicate further reduction in the water production costs.

The cumulative research findings were then adopted on a global scale for countries with desalination demand projections up to 2050. A globally prevalent LCOW range of 0.32 €/m3 – 1.66 €/m3 can be achieved by 2050 through 100% RE-based desalination. The global average LCOE is found to decrease drastically from 180 €/MWh in 2015 to approximately 50 €/MWh by 2050. The initial high LCOE in 2015 is due to the significant use of fossil fuels, taking into account the unsubsidised costs. The reduction in the LCOW during the transition can be attributed to the decreasing LCOE, the elimination of the cost of fossil gas for thermal desalination by the electrification of the desalination sector, the improved efficiency and decreasing costs of desalination plants. The cost range includes the water transportation costs from the desalination plant to the demand sites which can be further inland. The results show that solar PV and battery energy storage are key RE technologies that will drive the desalination sector in the future. This indicates that most regions with water stress are also those with plentiful solar resources. The resulting costs are competitive with the conventional cost of water desalination, as well as the projected costs of traditional water treatment methods in many parts of the world. As surface water diminish, groundwater levels decline, mountain glaciers retreat and pollution and salinization threaten available resources, traditional water collection methods become threatened and expensive.