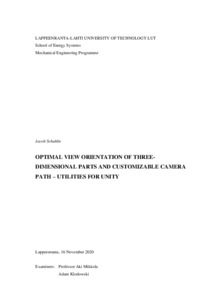 Simulations for the assembly of a product in a manufacturing plant plays a critical role in the successfulness of the product and the company. For the project MOSIM, Unity is used for completing this simulation work. When defining the tasks that need to be accomplished during the simulation, the possible parts from which the user can choose need to be displayed in such a way that the user is able to select the part based solely on the image because in some cases, the name of the part is not descriptive enough. This optimal view of the part can be determined by measuring certain metrics from the views of the object. These metrics are compared by using one of two methods: Weighted Scores or k Nearest Neighbors (k-NN).

In addition, during the simulation of the assembly, manual movement of the camera was previously used but became tedious to do every time the simulation was run. A new camera path utility was created which allowed the user to manually and intuitively define specific camera points that could be saved and loaded to make a complete camera path through which the camera would move during the simulation. Both goals were met and successfully implemented into Unity. Through testing and a survey conducted, the weighted scores currently result in better views of the tested objects as the optimal view from the weighted scores tend to show most of the features of the object. On the other hand, k-NN produced less than optimal views for the objects because some of the views were not showing enough detail of the object. k-NN is considered the preferred method, though, as the method allows the results to improve overtime as the training data set increases in size.