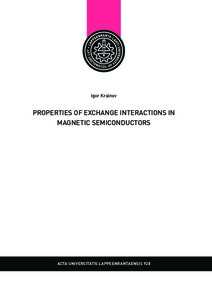 This dissertation is devoted to the investigation of magnetic properties of nanostructures with magnetic impurities. The properties of electron spin relaxation in magnetically doped quantum well was investigated. It has theoretically demonstrated that the presence of holes, resident or photocreated, in diluted magnetic quantum wells accelerates the spin relaxation of electrons using a mechanism that was previously ignored. This effect is due to the spin correlations, which establish between magnetic ions coupled via hole-mediated Ruderman-Kittel-Kasuya-Yoshida interactions in the paramagnetic phase. As a consequence, the electron spin relaxation becomes temperature and hole density dependent, in contrast to existing theories.

Indirect exchange interaction between magnetic adatoms in graphene was studied theoretically. It was accounted for the possibility of resonant tunneling coupling between a bound state of the adatom and the continuum of 2D delocalized states in graphene. In this case the indirect exchange between the adatoms mediated by the 2D carriers appears to be substantially enhanced compared to the results known from Ruderman-Kittel-Kasuya-Yosida (RKKY) theory.

Theoretical model for the gate-controlled spin-valve effect in carbon nanotubes with side-attached single-molecule magnets TbPc2 (Terbium(III) bis-phthalocyanine) was presented. These structures show a giant magnetoresistance up to 1000% in experiments on singlewall nanotubes that are tunnelcoupled to the leads. The proposed theoretical model combines the spin-dependent Fano effect with Coulomb blockade and predicts a spin-spin interaction between the TbPc2 molecules, mediated by conducting electrons via the charging effect.

The one-dimensional subband splitting in a bilayer graphene quantum point contact in which quantized conductance in steps of 4e2/h is clearly defined down to the lowest subband was investigated. The semiphenomenological model was developed which describe the lifting of the valley degeneracy at magnetic fields perpendicular to the bilayer graphene plane and mixing of K and K´ valleys from two nonadjacent subbands with indices (N,N + 2).